Upper Arlington was founded by the real estate developers Ben and King Thompson, who purchased most of the farmland that was to become Upper Arlington from James Miller in 1913. This land was directly adjacent to the Marble Cliff Quarry Co. They originally wanted to call it the "Country Club District" after the Country Club development in Kansas City, but by 1917, the community became known as "Upper Arlington," in reference to its southern neighbor of Arlington (now known as Marble Cliff). The Upper Arlington Company was incorporated that year and operated out of a field office built on the former Miller farm; that building is presently the Miller Park branch of the Upper Arlington Library. 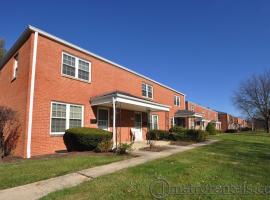